Prana is often described as the life energy.  And that is true on one level.  But as with all things in existence, there are more subtle aspects to this.

There are actually five main pranas, and further sub-pranas.  These five are known as the pancha vayu.  Let’s look at these in order of how strongly they are anchored to the body.  Pranas keep the body alive, and so this order correlates to how the various pranas withdraw from the body when someone dies. 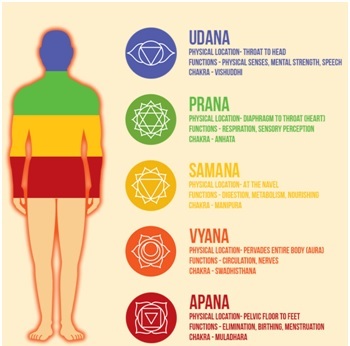 One of the most important practices in maintaining a balanced pranic state is alternate nostril breathing which aligns the solar and lunar nadis (or channels).  A careful examination of all of the yogic practices will yield clues as to which of the pranas are being worked on.  For example deep inhalation, holding, deep exhalation, holding are affecting the Vyana Vayu.

There are also five Upa-Pranas which regulate important functions in the body.

The pranic energies are affected by not only the food we eat, the air we breath, and the environment but also by our mental patterns of thought and the associated actions we perform.  That is why yoga begins with rightful thought and rightful action, as seen in yama and niyama, even before we get into asana and pranayama practices.

We seem to let society and the media define beauty for us.  What often comes to mind are people from magazine covers, or film...

Stop and Smell the Roses – Feel the “Grace”

“Stop and Smell the roses” - do we really comprehend the meaning of this phrase? To understand the depth of this phrase  we need...

Many people find solace in nature.  To get a break from the hustle and bustle of life, we take vacations in nature.  Cities have...