Perhaps you’ve heard of self-actualization in the popular media – most often it refers to Maslow’s ground-breaking work on human motivation, published in 1943.  As a psychologist, Maslow outlined a person’s needs into a progression which was later depicted as a triangle.  The Self-Actualization Pyramid has since become a staple in the academia of human psychology. 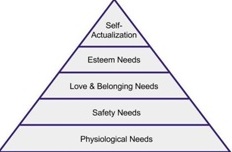 Maslow was attempting to answer what motivates a person, and how do they achieve personal fulfillment.  In that pursuit, he came up with a set of progressive plateaus that one strives for:

This seems logical enough, but let’s dive a little deeper into the achievement of self-actualization.  That is where things get interesting.  Some characteristics of self-actualized people are:

Having established what self-actualization means in a psychological context, let’s look at it from a spiritual point of view.  This is where we cross the threshold from a survival mode of existence to conscious awareness living.  This is where we go from a transactional mode of operation to a spontaneous, and natural way of being.  As Maslow himself noted later in life, self-actualization is healthy self-realization on the path to self-transcendence.

Already we can see that moving along Maslow’s path leads one to be more introspective and holds oneself responsible, rather than everybody else or the circumstances.  So it’s natural that as we move beyond the dimension of physical and psychological well-being, the importance of focusing within increases.  It’s noteworthy that this transition is not a hard milestone in personal development, but rather a gradient.  Even in stages of self-actualization, we can see spiritual attributes.

So self-actualization is not the arrival at the human potential, but merely an early step on the spiritual journey.  At that stage we recognize our role & place in the larger context of life on the planet, but most people in this phase still see themselves as separate from others, even while they may value them greatly.  The spiritual path awakes us to the realization that we are not separate from anything, and ultimately, our awareness grows to such an extent that we recognize the cosmic oneness in which we abide.

On Being Lost and Found

All human beings are inherent seekers, depending on their situations and their predispositions. What do most people seek? The range is vast; the perfect...

“I think, therefore I am.”  You’ve heard this before, it’s a hallmark of our hubris.  But take a moment, sit comfortably, take a few...

Many people find solace in nature.  To get a break from the hustle and bustle of life, we take vacations in nature.  Cities have...